I’m at the stage in my second novel where I need to be thinking of finishing up a first draft. In metaphorical terms, this feels like having to neatly catalogue the debris from a nuclear explosion; you allow your narrative to mushroom cloud until it reaches a certain point where everything needs to be gathered together and made purposeful. I need to impose order on the chaos. 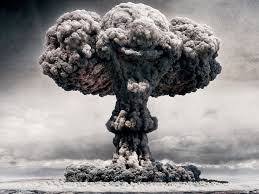 This analogy may be slightly out of control…

There are certain challenges to this (she says, stating the obvious). The first and greatest is self-imposed and it’s due to the kind of narrative I’ve chosen to use to tell my story in this novel. Where my first novel clung close to the protagonist’s experience and every chapter was recounted from her point of view, the second novel introduces a lot of new characters and we experience many events from their perspective. This means that most chapters are roughly broken into three different parts which deal with three different journeys. There’s a lot going on. I’ve tried to be economical with language and description in order to maintain tension and clarity. This is a great device for building towards a climax; at any one time you have three or more characters in situations that the movie people would describe as ‘containing scenes of mild peril’ and you can switch between these three strands, leaving your readers dying to know what happens next. At least, in principle.

However, the challenge comes when you need to slow the pace slightly to explain important details which are necessary to bring the book to its climax; why has one character been avoiding another? Where did that guy go and how did he get back? How exactly are the characters going to overcome their obstacles? These are the moments when you have to try to be very clever with exposition. Too quickly delivered and it sounds contrived; too slowly delivered and your mushroom cloud collapses.

Like most people, I find juggling a full time job and a writing career quite difficult. The style I’ve used for my second novel allows for shorter attacks, which I’ve just about been able to fit into my hectic schedule (in case this sounds like bragging about my fabulously busy life, it’s not – ‘hectic’ does not necessarily equal exciting, more a general, creeping disorganisation which means I never get anything finished.) However, now that I’ve reached the novel’s moment of crisis, I know I need to take a different approach. The blitzkrieg attacks will no longer work. I need to lock myself in a room – hey, does anyone know of any abandoned hotels out there? Possibly built on an Indian burial ground? – and not let myself out until I have tied the novel’s various plot strands together in a way that will support the narrative’s shaky superstructure. This doesn’t require elegance or finesse, but it does require a certain measure of ingenuity and I can’t be clever on a weeknight when Masterchef is on. 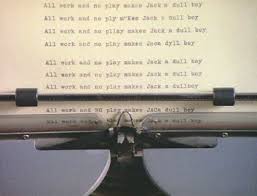 See how isolation can help you find a sense of clarity?

Last time I reached this juncture, I had a week in the Tyrone Guthrie Centre at Annaghmakerrig to finish the novel. I had a brilliant time and got a huge amount of work done, with no distractions except for the smell of freshly baked scones wafting up from the kitchen below. There’s something strangely comforting in the fact that I’m yearning to go back there again to finish this first draft too. It’s not just the thought of the scones; rather the idea that I’m becoming acquainted with a process that works for me. These are the little milestones that remind you that writing is not all about prostrating yourself before the muse – it’s about graft too. And we’re all capable of a certain amount of graft if we can make the time.

3 thoughts on “Pulling It All Together”